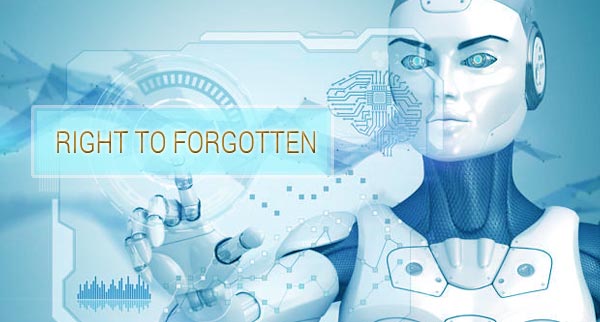 What is “Right to be Forgotten” in Indian Data Privacy Law.

The B.N. Srikrishna Committee has an important significance on obtaining the agreement of an individual to process & can use the personal information. The committee said consent must be “informed”, “specific” and “clear”, and needs to be capable of being withdrawn as easily as it was given. Thus, there is no right to erasure of data in the proposed law, and the bill will be going through a parliamentary process of word and approval before it becomes law, and might be some changes has brought in.

Therefore, the Protection Bill of Private data in 2018, embrace a segment on “right to be Forgotten” but the projected bill doesn’t give the right to erasure. The Section 27 of the bill has listed out three premises in which an individual will have the “right to restrict or prevent continuing disclosure of personal data” or the right to be forgotten. This will be relevant, if data disclosure is no longer necessary, or the consent to use data has been withdrawn or if data is being used contrary to the provisions of the law. An adjudicating officer will determine the relevancy of one of the three scenarios.
The officer can also determine that the right of the individual to limit the use of her data over-rides the right to freedom of speech or right to information of any other citizen.

The European Court of Justice (ECJ) ruled in favor of Mario Costeja González In 2014, a Spanish man who was sad to look out his name on Google threw up a newspaper story from 1998. In 2009 he approached the newspaper to get that article removed as he felt it was no longer relevant. The newspaper felt it was inappropriate to erase the article, and Gonzalez then approached Google to not throw up the article when his name is searched. ECJ asked Google to remove the inadequate or not relevant data from its search results. Therefore, the ruling came to be known as the “right to be forgotten” and has been strengthened in data protection laws and regulations within the EU, as well as in the EU’s General Data Protection Regulation (GDPR).

After the article for EU GDPR outlined the situation that EU citizens will exercise their “right to be forgotten”. The News Article gives individuals the right to get personal data erased under six conditions, including withdrawal of consent to use data, or if data is no longer relevant for the purpose it was collected. However, the request may not be entertained in some situations such as if the request contradicts the right of freedom of expression, or when it goes against the public interest in the area of public health or historical research or regarding statistical purposes.

One thought on “Right to be Forgotten – Data Privacy Law”